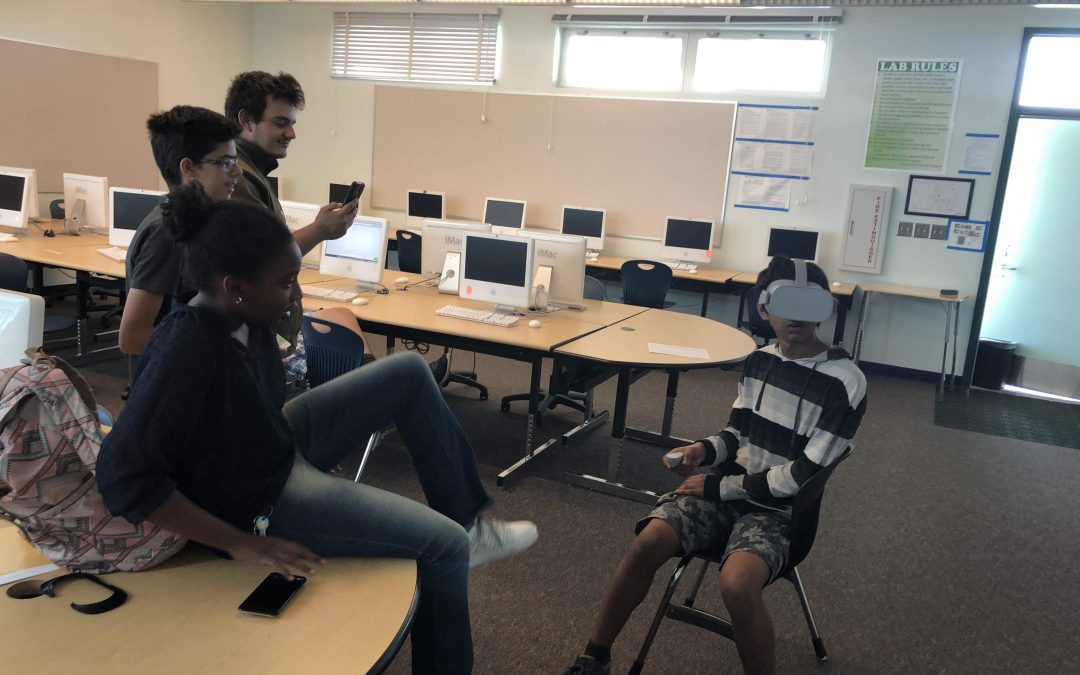 We are VR! Last week, students in the arc/DH@SDSU electronic literature program continued their exploration of digital worlds and virtual methods of storytelling while preparing themselves for the upcoming showcase/pizza party on November 7th at 4 PM in the Digital Humanities Center – LA61 (bottom floor of the library annex under the dome)!

Return students in Katie Chestnut’s (Graduate Student, Education) class were working hard on the projects that they had started previously in the term while brave, new virtual adventurers stepped into digital space. Katie had a blast watching her student’s reactions, or lack thereof! “Jorge and Jorge tried the VR today with some pretty amusing reactions. Jorge, dressed as Goku from Dragon Ball Z, caught a case of the heebie-jeebies from “Face Your Fears.” The other Jorge, as stoic as his Batman costume’s namesake, simply shrugged after plummeting to his death in “Killer View.”

Brenda Taulbee (Graduate Student, English and Comparative Literature) helped her students experience inner calm and see that VR doesn’t have to be used just for surprises and excitement—it can be equally as beneficial when used to induce states of calmness and relaxation. “While everyone last week gravitated towards the jump scare games,” said Brenda, “the crew today were more interested in the intrigue of Storm Shelter and the calming effects of Night Sky.” Students also expressed a strong interest in figuring out how to make their own VR games using a low-to-no cost setup involving Android software.

Be sure to come and see the students’ hard work on display at SDSU for the pizza party/showcase on November 7th. We want everyone to see the exciting projects the students have been producing throughout the program.