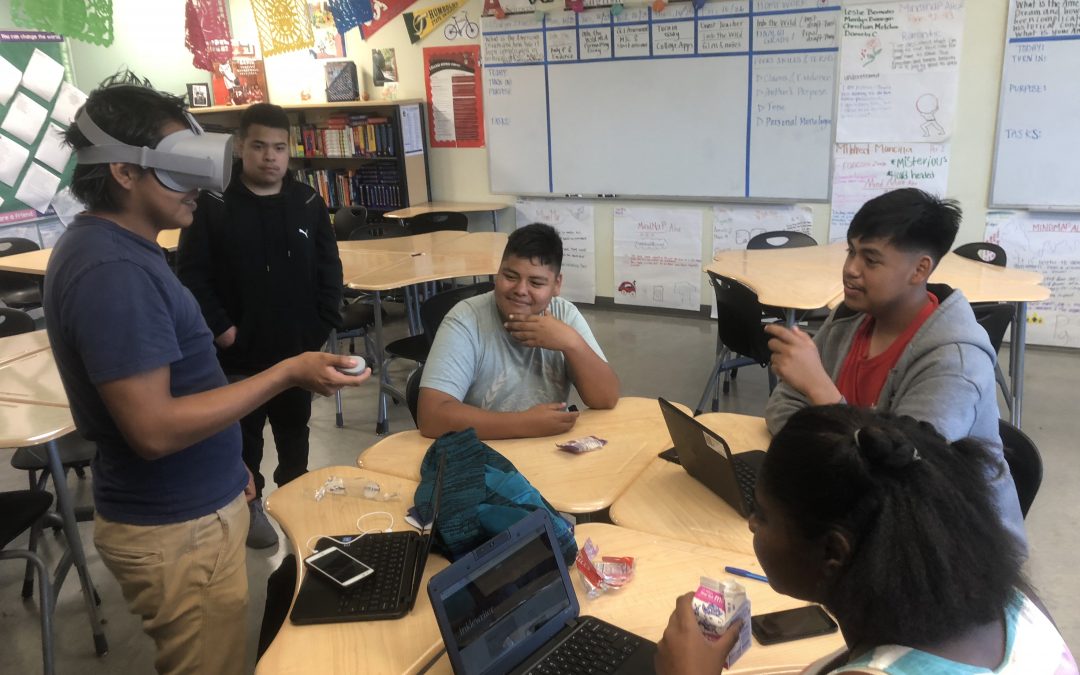 Week six of the arc/DH@SDSU electronic literature program saw students don the polymer helm of Virtual Reality (VR) and explore their fears in a variety of methods. VR allows students to see more tactile methods of storytelling, fully immersing the senses in the story at hand. VR also allows us to ask questions about what it means to “read” a text, and how reading differs in a VR story than one written on a page.

Over in Brenda Taulbee’s (Graduate Student, English and Comparative Literature) class, at Lincoln, her students enjoyed the VR headset and games so much, they ran the battery out! Enjoying the students’ reactions, Brenda said, “They were really excited for the VR headset. Santiago made it all the way through Sisters. The first scene had him screaming, but by the end he was casually predicting the ‘jump scares.’” While it charged, the students shared their knowledge of different games they enjoyed playing in group discussion, and then it was back into exploring new worlds!

Mission Bay High School showed an excellent turnout as well, with students expressing definite interest in what VR has to offer. Students tackled the creepy-crawly world of Stranger Things with varied levels of trepidation. Brenda remarked, “LaShawn made it through the whole thing very stoically, but Michael (and I) lasted less than a minute.” VR was such a success that a few students decided that they wanted to try and make their own VR games in the future!

Katie Chestnut (Graduate Student, Education) had a great time with her students at SCPA exploring the possibilities that VR offered, even drawing in a neighboring English teacher! Better yet, students who weren’t using the VR headset were actively working on the Twine projects that they had started in previous weeks. “VR was an absolute blast with the kids,” said Katie. “When they weren’t facing their fears, students were typing furiously, eager to make headway on their Twines.”

Over at Hoover, students put themselves into deliberately frightening situations in the Oculus game, Face Your Fears. In it, the viewer must experience a variety of different phobias, such as acrophobia and arachnophobia. Katie observed, “Juan found the games more intriguing than scary. He remarked, quite drolly, that “it’s about time gravity made a play” while in the “Face Your Fears” game. Kili was gratifyingly dramatic in her responses. She was so immersed in the experience she startled us with her gasps.

There are quite a number of students who have expressed interest in displaying their work at the student showcase and pizza party at SDSU November 7th, and we are excited for them to do so!