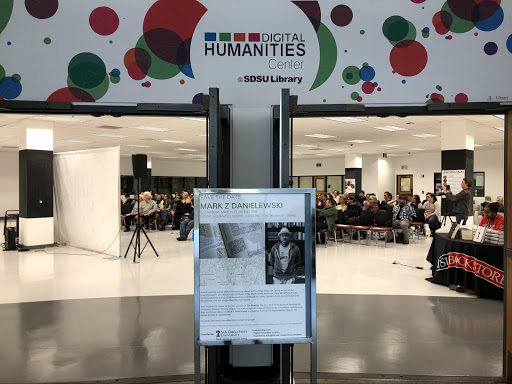 “I’m going to tell you a ghost story…” Danielewski began, and the room was enthralled.

Well, maybe he didn’t begin his talk this way this past Wednesday, March 13th 2019, but that is certainly one place the literary titan took it.

In celebration of the acquisition of the Larry McCaffrey Archive, Mark Z. Danielewski, Larry McCaffery and Sinda Gregory held a conversation that covered a broad range of topics including the powerful trio’s literary success and collaborative careers, the importance of the physical archive, and the effects of fatherhood on writing.

In what McCaffrey dubbed, “Interview #3,” he, Gregory and Danielewski revisited the discussions and interviews that started it all, diving back into the days where the two met in a diner in Hollywood (where Mark had previously worked as a plumber) to discuss the earliest versions of House of Leavesand to build a friendship that would withstand the test of time.

The archive, Mark related, gives us a sense of how one cultivates a version of a work. In this, there still remains a necessity for the analog; the physical documents that often become digitized and uploaded. These documents allow for an examination of material that can be missed, cut off, or overlooked in the web versions. Danielewski spoke powerful testament to the importance of maintaining these physical records with care in the constantly changing world of web servers, where links may become defunct and accounts may be lost.

Another major talking point during the discussion focused on the necessity of friendship and relationship building when working in this field. The cultivation of relationships and the ideas that form between those bonds, according to Danielewski, are what really make literature, because it is not the narrative itself that matters, but how we engage that narrative.

When asked how his introduction to fatherhood this past year as changed his writing, Danielewski, called “one of the most self-conscious people I have ever met in my life” by Gregory, related that a large shift, for him, was dealing with a refocus of ego away from the defense of the self and into the extending of personal defenses to include a new individual.

Before talking briefly about a recent story he wrote called “Love is Not a Flame,” Danielewski gave the audience powerful insights on the drawing of inspiration, arguing that the difficult task is not finding something to be inspired by, but being able to filter out all of the excess inspiration and focus on only what you need.

The ghost story, as it turned out, was a retelling of his father’s escape from Poland during the second world war. However, in true gothic fashion, Danielewski managed to weave the past and the present into a singular narrative where a symbolic red wagon becomes the vehicle through which father and son share a moment of history, framed in cinema, cut and pasted into memory.

If you would like to watch a recording of the event, click here for the 360 Livestream and here for the standard recording so you can see this amazing event for yourself!